Emotional and perfect debut by Kristian Marius Andersen.
He know his material and demonstrated great virtuosity, deep concentration and a willingness to maintain its expression. He manages to lift his play to a personal expression. A breathtaking journey into his musical world.

His skills on the three rows keys plus one for the feet is very rare.
Arms, legs, fingers and toecaps is running as an octopus. Wow how that debutant plays!
Kristian Marius Andersen is a great musician. And not so different after all. Just better.

Kristian Marius Andersen is a superior musician. Virtuosity seems to be a joy injection for him - for the audience a source of wonderment. Not only has he a formidable technique, but also a sound and sense of form of high class. As improviser, he is impressive, builds superior to both individual structures as the entire process up .... Great!

Kristian is the greatest musical talent I have ever met. He can play anything that is written for organ. He improvises in all styles - jazz, classical, pop, funk, gospel. Both the church organ, Hammond organ or piano. 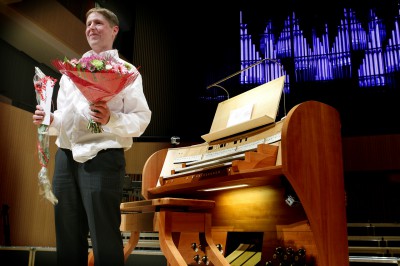